With her fashionable outfits, drool-worthy food posts, and passion for animal advocacy, it’s no wonder Taryn Rasgon has become one of the most well-known vegan influencers on Instagram. She is the owner of Vegetaryn, an online store specializing in vegan apparel, and co-founder of Biz Babez, a female co-working space in Los Angeles. Her Vegetaryn Insta account alone has amassed over 80K followers and she regularly receives hundreds of likes and dozens of comments on her photos. Through her online presence, she is able to demystify the vegan lifestyle, particularly in the realms of food and fashion, in a manner that appeals to the masses.

Can you tell us a little bit about your journey to veganism?
I went vegan eight years ago after studying abroad in Barcelona, Spain. I was a sophomore in college and it was the best decision I ever made. It was easier than I anticipated, but I did not go vegan overnight. It was about a six-month process. I started out eating vegan three days a week and eventually realized I was eating vegan every day because I felt better on my vegan days. It’s now been eight years of being vegan and I won’t look back! You can watch a more comprehensive video sharing my vegan story on YouTube.

Taryn with the Cougar Quilted in Off-White

You live in Los Angeles, which is widely known as one of the most vegan-friendly cities in the U.S. How does it feel living in a city that embraces veganism?
I am fortunate to have grown up and live in LA! The vegan options here are endless, but I have traveled all over the world as a vegan, and if you do your research or get creative there’s always something to eat!

How did you decide to start a business creating vegan apparel? Were you ever nervous or apprehensive about taking that kind of leap?
Starting any business and taking a risk can be scary. I started Vegetaryn to help spread the vegan message in a positive way #apparelactivism.

What’s your favorite Vegetaryn item and why?
If I had to choose, probably LETTUCE EAT PLANTS because it is the OG Vegetaryn tee 🙂

What was it like when you first began adjusting your wardrobe to reflect your vegan values? Did you give up all of your non-vegan clothing right away, wait until they were used up, or something else?
It took me awhile to part with some of my non-vegan clothing items. I remember my Ugg boots sat in my closet for about a year before I decided to give them away.

Who inspires you within the vegan and animal rights movements?
I am inspired by @rawvana, @daniellamonet, and @applesandamanda

What role do you think social media plays in the vegan and animal rights movement? Would you consider it a type of activism?
I definitely think posting about veganism on social media is a type of activism. It’s actually what helped me the most when I first went vegan. I used to follow everyone with the word “vegan” in their bio. I’d see what they’d eat and learn what to eat myself!

What’s a typical week like in the life of a vegan Insta influencer?
No one day is the same. On top of being an influencer, I run a business & brand Vegetaryn.com where I sell funny & punny vegan tees about eating your fruits & veggies. I also own a female co-working space in DTLA called Biz Babez (www.bizbabez.la). I did not expect to garner over 80K followers, but I have worked hard to build my brand and business. I am fortunate to have a platform to use my voice. I am constantly working, but I love what I do!

What are your favorite vegan restaurants to eat at?
Real Food Daily, Sun Cafe LA, Shizen, and Ramen Hood

When did you first discover GUNAS?
On Instagram at the beginning of 2018!

How would #gunasgirls describe you?
Trendy, sustainable, eco-friendly fashion! 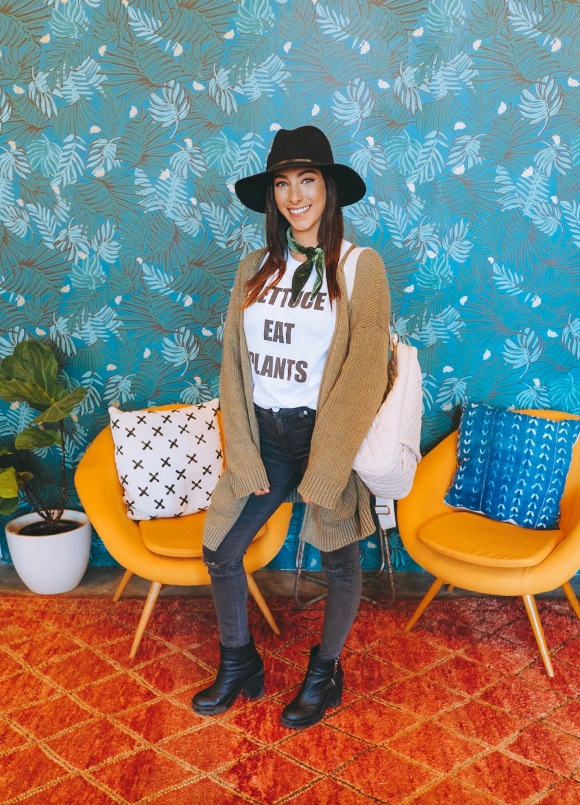 Make sure to support Taryn by visiting her websites and following her social media accounts: